Captains' Drive In 2020 - with social distancing

The members were not able to gather round to cheer on the new Captains in this unusual year - but in order to maintain the traditions of the club the Captains arranged to do the first drives of the year in a different way.  Fortunately the wonders of modern technology enable you to share in that event.

A very big thank you to everyone for supporting our charities last year. In total the super sum of £11,500 was raised during the 2018/2019 season for our two charities CANCER RESEARCH (UK) and ENGLAND & WALES BLIND GOLF.

On Friday 21st June - the longest day - Iain Wallace and Richard Glenn took on the challenge to play at least 100 holes of golf. Teeing off at the official sunrise of 4:44, Iain and Richard flew around the course completing their first 36 holes by 9:00. Although the pace slowed slightly during the day, members and visitors cleared a path to allow the boys to keep going unhindered. A succession of caddies ensured that Richard and Iain could concentrate on the golf - and what golf they played, being well under par round after round. Richard managed to play with the same ball all day. By 8:00pm the legs were aching and the feet were sore but the challenge was in the bag with 108 holes - six complete rounds - completed. The boys retired to the clubhouse where they enjoyed a well earned beer, some hot food and a round of applause from members. Over £2000 was raised for Zoe's Place - the Captains' charity - which was fantastic. Thank you to everyone who sponsored Iain and Richard and a special thank you to the anonymous donor who gave over £750, you know who you are.

Mid round Zoe paid the boys a visit to cheer them on - and they took a break to chat and pose for a photo with her.

The sun was just forcing itself awake to defrost the greens as the Captains and Vice Captains with their many helpers arrived for the Drive In.

This year the Captains' Charity is Zoe's Place and the 2019 team posed with the poster as the morning began.

The Clubhouse was packed to the gunnels for the draw which would yield the biggest prize in the history of the event.  Last time the £1000 prize came up the name in the frame didn't yield a shout of joy but this time the winner was present in the clubhouse and will receive a real cheque for £1000.00.

Patrick McGowan was the lucky man  and was delighted to receive the presentation cheque from Captain Maggie (a winner herself only 11 months ago).  Fellow Captain Chris had signed the cheque but was not present on the evening.  Had he been there he would have been able to present himself a cheque for £205 as the winner of the 51 Club draw.

The Captains' Final Fling was ABBAtastic

We gave Chris & Maggie a great send off with their Final Fling on Saturday 23rd March and they both got into the ABBA spirit adorned in sparkles with 80's style hair and dress! 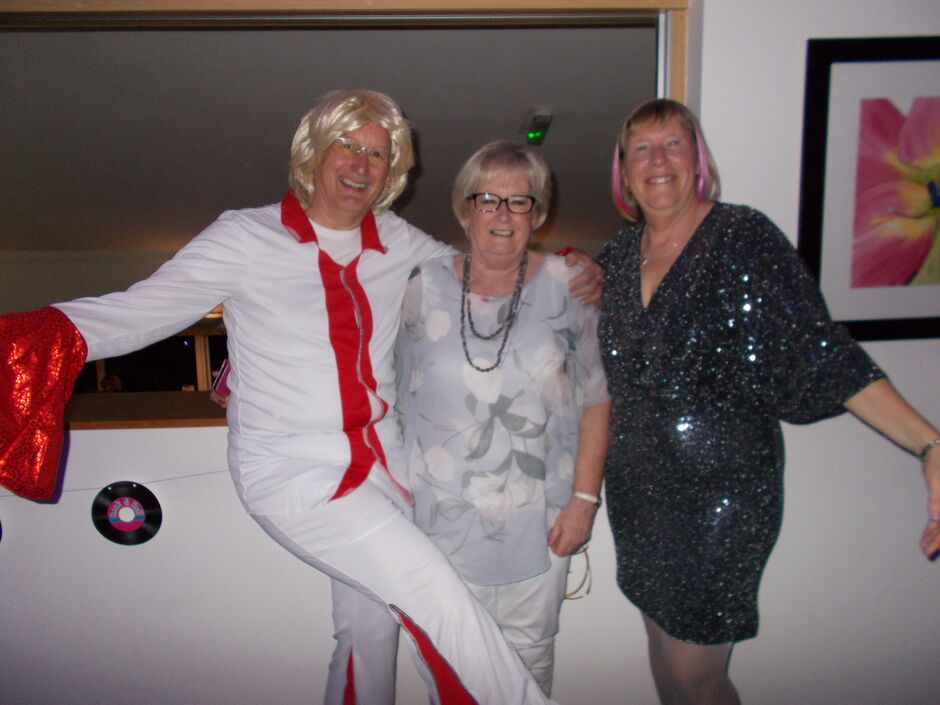 Valentine’s Day 2019 was celebrated in style at KGC with an evening of fine dining and entertainment.

The fine dining was supplied by our regular chefs who provided a high quality menu featuring lamb, guinea fowl and monkfish in the main course with a vegetarian option of a leek, mozzarella, walnut and lemon tart.  From the starters, the sorbet, the mains and through to the desserts all who selected them were fulsome in their praise. The meal was served in their usual efficient way by Stuart, Sammie and helpers - all very smartly turned out in their special outfits.

The fine entertainment was supplied by pianist Lincoln Noel.  Whilst the diners enjoyed their meal Lincoln delivered an almost continuous medley of familiar and unfamiliar tunes with his own very special brand of improvisation. At times it was like a light being switched on for the listeners as the realisation came to them that they did indeed know that tune.  Whether we recognised the tunes or not it was all very enjoyable and played in a very sensitive way so that we were always aware that the music was there but we could also hold conversations with our fellow diners if we wished to.

Once the meal had finished Lincoln’s entertainment became much more focussed as he connected directly to the audience with his playing, his singing and his amusing patter.

A Happy New Year with the Motown Devotions

The Club House was bursting at the seams as members and their guests gathered to say goodbye to 2018 and to welcome in the year of 2019.  As usual, the notion of "smart casual" was totally ignored by the ladies who donned their party frocks and revelled in their haut couture ensembles for the evening. The gentlemen were somewhat more varied with their evening apparel ranging from just smart casual to extremely smart casual to smart formal - and with an element of fancy dress thrown in for good measure.

It was prizes galore at the December Draw Night as a merry throng of members and guests celebrated the last draw night of 2018.

As well as the prizes for the regular raffle - for this evening various beverages and a Christmas Hamper were on offer - there were some extras to add to the fun and merriment.

First up was the Christmas Sweater competition. There were lots of special sweaters at the club with those who offered themselves up for judgement shown below.

The staff joined in too - Lauren, Sammie and Stuart captured the Christmas atmosphere with their special outfits.

For more information and to see the lucky prize winners  click here ...

On November 7th at the Warwickshire Ladies County AGM Veronique Lintin was appointed  the Ladies County Vice Captain. In addition to this honour she was also presented her 2nd team County Colours. Veronique is currently our Scratch team captain and past ladies Club Champion. We all wish her success in this new role. 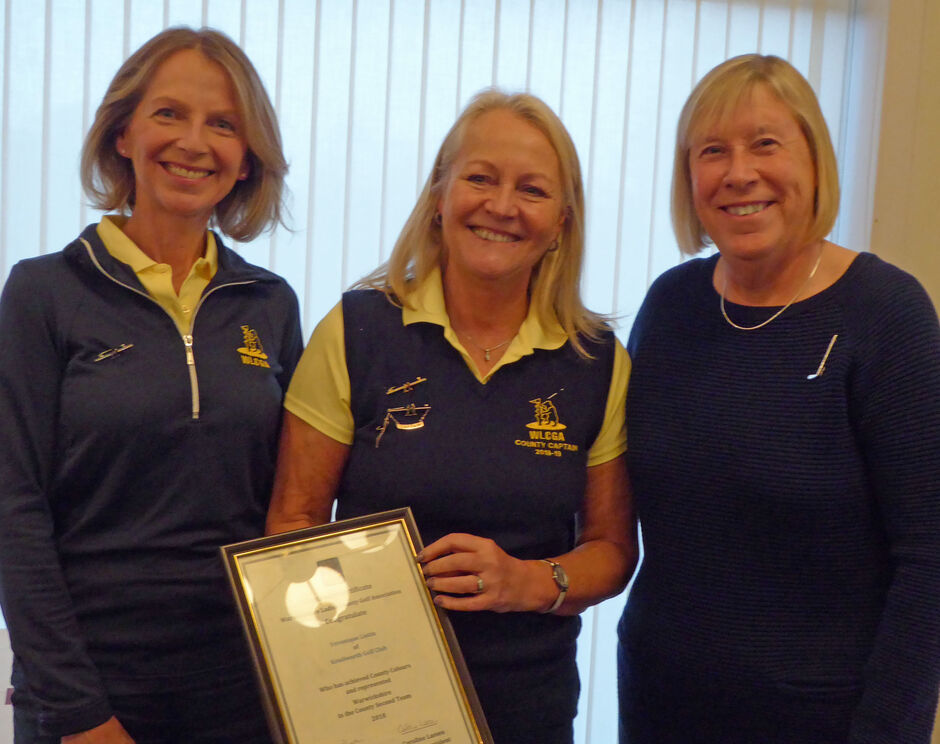 KGC Women in the Pink 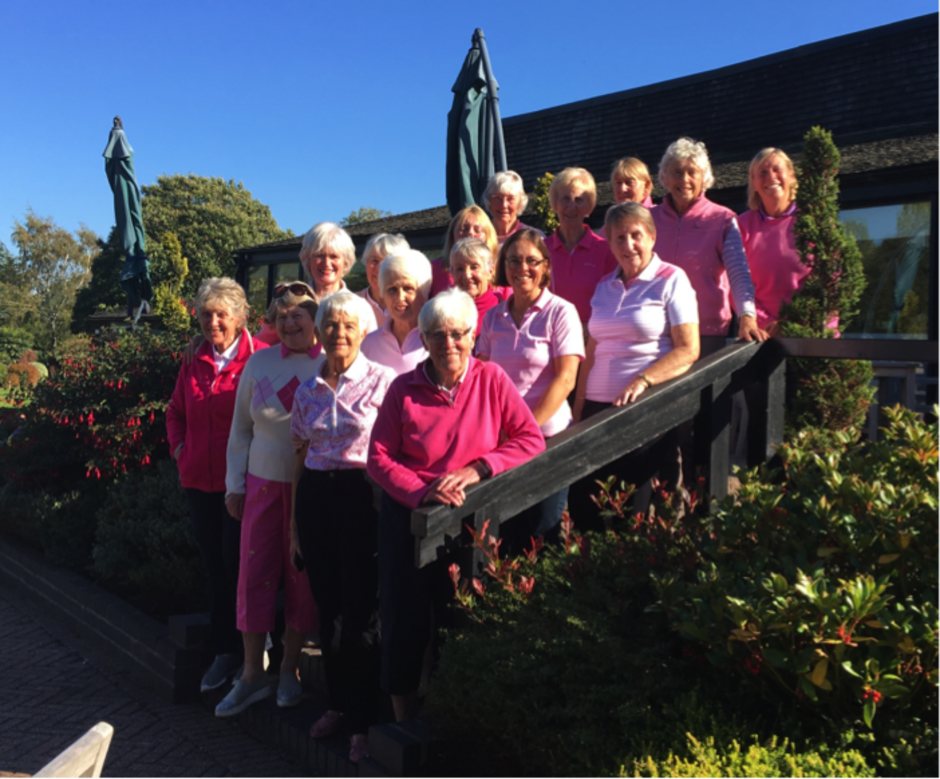 Breast Cancer Now’s “Wear it Pink” day is one of the biggest fundraising events in the UK and in support of this the KGC women golfers added an additional £1 to their entry fee towards this very worthy cause. A donation will be made of £100 to Breast Cancer Now!

Once again the sun shone brightly and the morning women pictured above looked splendid in their pink outfits.

Congratulations to you all , well played and many thanks to all team members who played throughout the season to enable the team to reach the final.

Arriving at the Captains' Gala Evening the guests were met by a vision in black leather with glowing flamingo pink tights. Behind the 60s shades was Captain Maggie - waiting at the top of the barroom steps to greet the guests and welcome them to what was to be a great evening.  The bar was humming with excitement - the dress code of smart casual being ignored by many of the ladies who were dressed exceedingly smartly in their colourful, fashionable and elegant summer frocks.

It was that time of year again when the insomniacs of KGC got their wish, a golf competition with tee reserved starting at 6.30am.

On the eve of Midsummer 28 intrepid golfers set off to play 9 holes followed by a cooked breakfast in the Clubhouse.

A BIG thank you to all who played and all who helped over the weekend.  Just over £1500 was raised for the Captains' Charity.   To read more and see pictures click here

Following a successful day, despite the weather on April 25th, we were able to present the Mayor with a cheque for £2897.00.

The money will go towards her charity fund for both Birth & Babies at Warwick hospital and new youth activities at The Kenilworth Centre.

The cheque was presented by Sue Draper (joint organiser with Patrick Fleming), along with our President Ann and Captains Chris and Maggie.

Thanks to all those who played in the event or contributed with sponsorship and to the club for hosting.

Kenilworth at Minchinhampton May 2018

On a beautifully sunny day the gentlemen of Kenilworth visited their twin course in Minchinhampton.  Having been created back in 1889 the 2 clubs celebrated their joint centenary in 1989 which initiated a yearly golf day together alternating between the two clubs.  This year it was the turn of Kenilworth to play at the delightfully picturesque club set on top of the Cotswold hills of Gloucestershire.  ... read more

The Captains' Charity donation to Acorns Hospice May 2018

Last year’s captains, Alison Tyler and Jim McCarthy, were delighted this week to present a cheque to Acorns Children’s Hospice in the sum of £18,325 for monies raised for Acorns as their captains’ charity.

Acorns are absolutely delighted to receive this fantastic amount and Alison and Jim wish to express their thanks to everyone at Kenilworth Golf Club who generously contributed to the cause.

Kenilworth Golf Club were proud to host the 10th Charity golf Day for our Town Mayor. This year Mayor Kate Dickson has two charities she is supporting, firstly Birth & Babies, the new midwifery led unit at Warwick hospital (she herself is a midwife), and secondly youth activities at The Kenilworth Centre. Kate's husband Richard worked for the charity CORD who were Pat Ryan's charity when he was Mayor for the first golf day - quite a coincidence. £2897 was raised for The Mayors charities - a splendid result.  Read more ...

The winning team from Charles Peters are pictured here with the Mayor and also contained the player with the highest individual sore, Phil Jordan. Congratulations to them all.

March 24th 2018 brought the Final Fling of Captains Alison Tyler and Jim McCarthy preparatory to their handing over the reins at the AGM in a couple more weeks. Read More ... 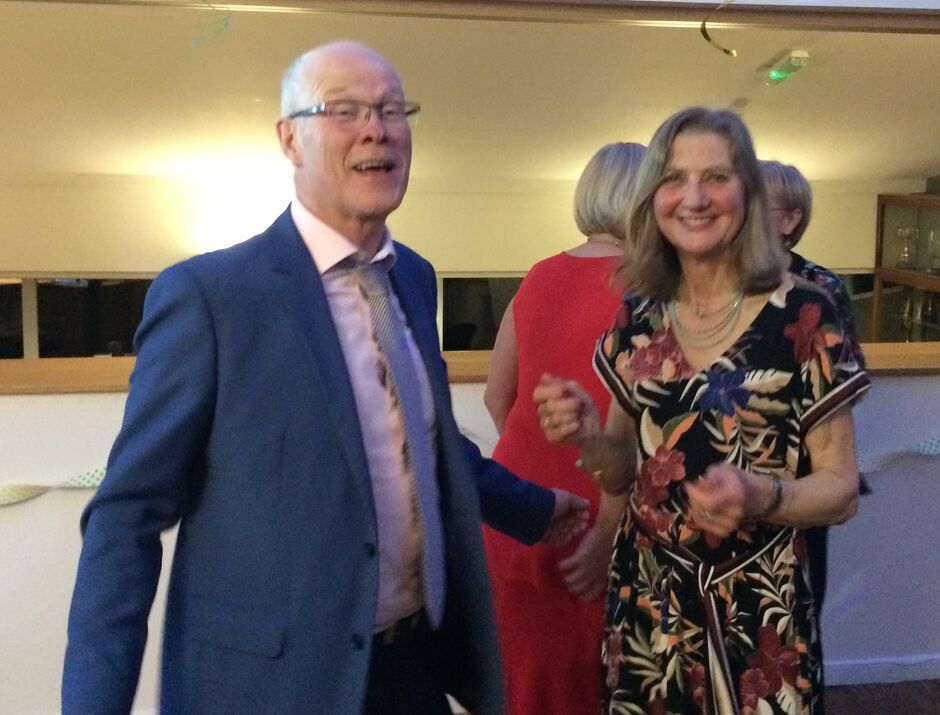 New Year's Eve with Muve On

"Another year over and a new one just begun"

The Year of our Lord, 2017, ended in style at Kenilworth Golf Club with a packed house enjoying the great food and the entertainment which followed. Read more ...

A Bavarian Evening at KGC

October in Kenilworth saw Karl's Bavarian Brass visit the club to entertain the guests at the Ooompah Night. Some members even dresses up for the occasion. 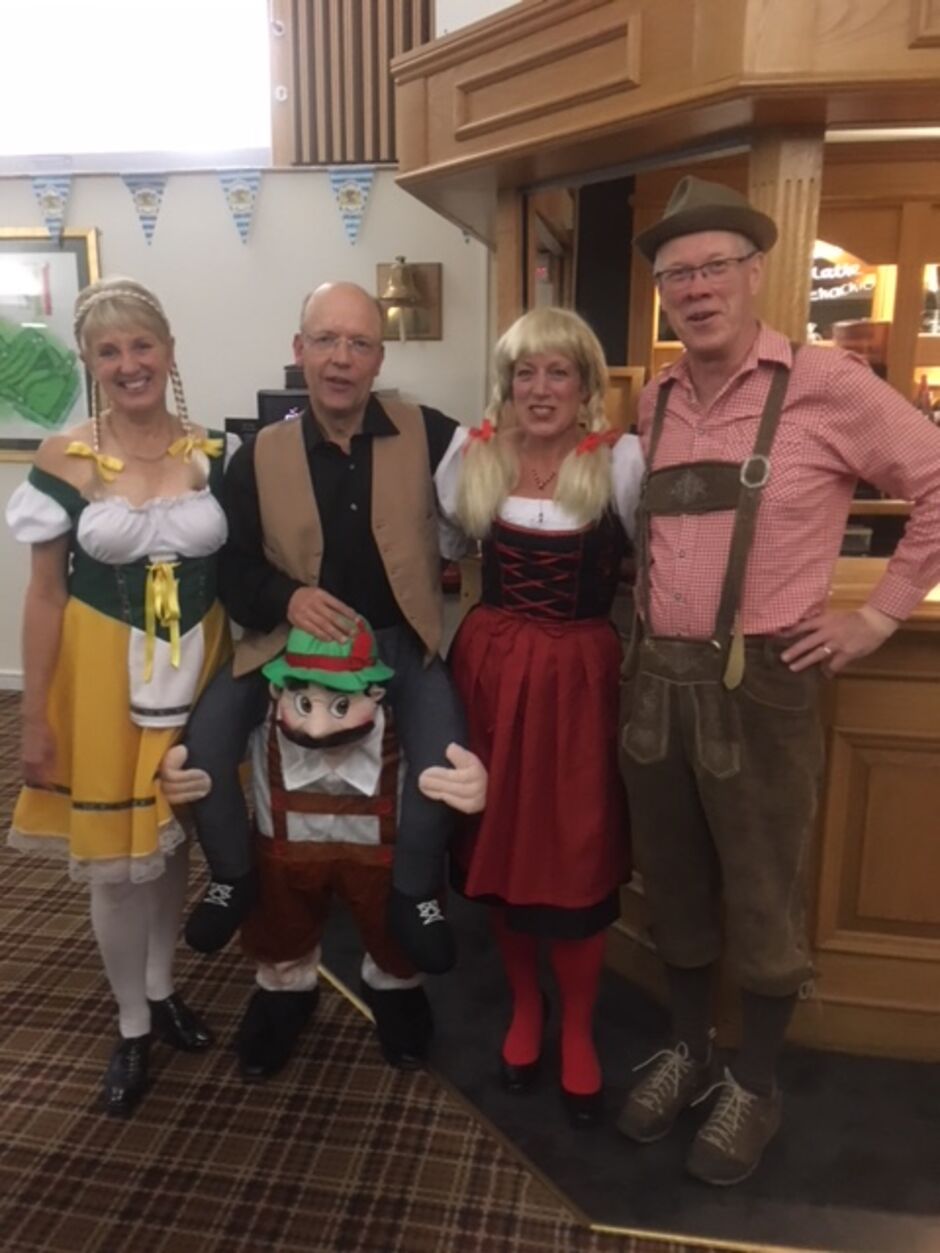 
Victory for Kenilworth at Llandrindod Wells

At the Club AGM in April the retiring Captains Lesley Cheslin and Charles Leggitt presented the proceeds of the Captains Charity during their year in office to Barbara Elsey of the NSPCC.  A magnificent total of £16,687 was raised which will be used for the benefit of abused and neglected children in Coventry.

The Captains expressed their thanks to all members of the club who's generosity allowed this gift to the NSPCC to be made. Lesley commented "You have once again done Kenilworth proud!".

A Sportsman's Dinner with Angus Fraser

England Selector Angus Fraser joined the gentlemen of Kenilworth and their guests for the last Sportsman's Dinner of this season on March 9th.  As Chairman Malcolm Kelly pointed out his name sounds like that of a fellow Scot but Angus was born in Lancashire and then went on to play cricket for Middlesex from 1984 to 2002.  He was selected for England and played in 46 test matches and 42 one day internationals.  He now serves as an England selector.  He is still at Middlesex County Cricket Club, being the Managing Director of Cricket.  He has also spent time as a journalist and as a commentator - and with that background he had a wonderful collection of stories with which to entertain the attendees.